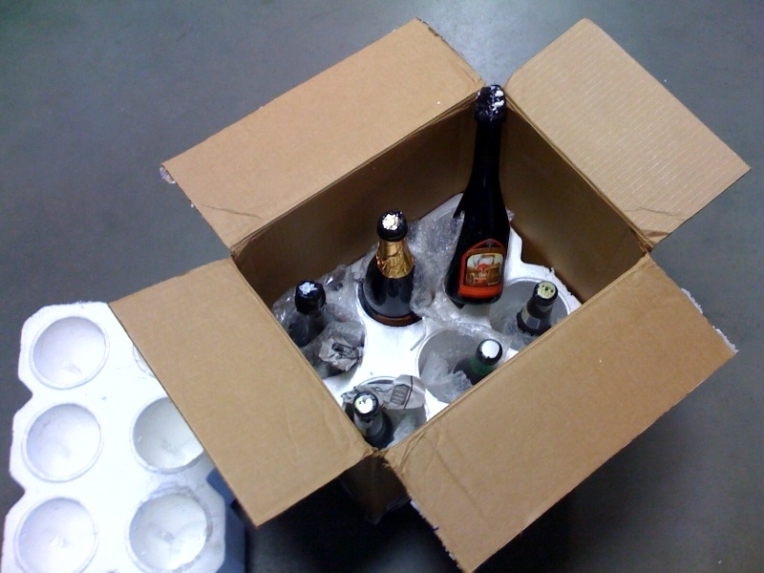 Another box landed on my desk at work today. This time I knew what it contained and I was very eager to open it up! These little postal distractions at work are quite nice. This box concludes my first forray into RateBeer beer trading. I entered into a trade with a pretty seasoned trader, WeeHeavySD. I sent a nice box of treats that I picked up during this years Pre-ZBF festival at Alvinne Brewery. The treats included beers from Alvinne, De Struise, De Molen, and upcoming Pipeworks. So what did I receive? Well, a bottle of Alesmith’s 2006 Barrel-aged Old Numbskull, Lost Abbey’s 2008 Cuvee de Tomme and 2008 Angel’s Share, 2007 Kuhnhenn Raspberry Eisbock,  Bell’s Hopslam and Expedition Stout. I am really looking forward to all of these. The trading worked out pretty well. I was reminded though how cheap beer in Belgium is. Some of the beers I sent were quite complex brews that took a lot of time, effort, patience, skill, and costly ingredients to make but only cost me a few euros. Unfortunately for the brewers, Belgians just won’t pay much for beer, wine yes, but beer no. In the US, brewers can be more fairly rewarded for their effort, but I’ll stop here before I begin a long rant. Anyways, trading was fun and I am sure I will do it again. Its a great way to get beers that I can’t normally get.