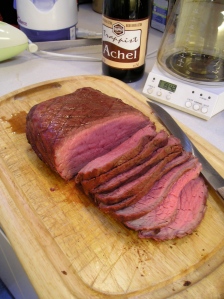 Last Sunday I threw a good sized chunk ‘o cow on the old kettle grill. I’ve done thick cuts of beef before but never such a lean large peice (very well trimmed 1.35 kg roast… 3 lbs for the non metric people ). Wasn’t sure if I was going to have some trouble keeping it moist so brushed it several times with a mixture of a homebrewed Russian Imperial Stout and worcestershire sauce. It did turn out very juicy. Other than that the meat was just lightly seasoned with salt, pepper, and a touch of a store bought beef roast seasoning. Quickly seared the meat direct over cocconut briquettes and then cooked for about an hour indirect. I was busy with something else and left in on until it reached 54C (129F) internal temp, but I should have taken it off around 51-52C. Still turned out quite nice. I think next time I will marinade it shortly with the stout-worcestershire sauce before throwing it on the grill. Perhaps a little oak on the fire would be nice too.

The beef was accompanied by a large bottle of Achel Bruin. Its been a while since I have had this, so I had forgotten how sweet it is when its fresh. Hmmm, maybe thats why I haven’t had it in a while. When it has some age on it, this beer can be very pleasing. So, That pairing didn’t work out all that great, but the Saison Dupont with the lightly spicy fried ravioli I whipped up for the appetizer was a heavenly cooperation of flavors!

Click the image above for a couple more photos.

All I wanted to say is that it was an easy cook and that if you need to cook something for a crowd and don’t want it to be “work”, then slap a roast on the grill.