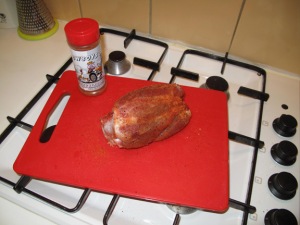 A while back I won a bottle of Yardbird from Noskos over at BBQ NL in a giveaway. Unfortunately I can’t say that I won it in some impressive show of skill, just dumb randomized luck. It was a while until I actually had a chance to try out this rub, and once I did it got lost in the shuffle. Well, I just happened to see the photos from that first cook and thought I would post a quick note.

As stated on the bottle “Created for Chicken, made for Pork” this rub was originally intended for chicken but users quickly found that it works great on pork too. I tried it out on a trimmed up “hammetje” for the first cook. A simple and quick cook. The rub was a smashing success! Good balance of flavors. It is definitely a rub you should pick up if you see it. It is also great since you can cook up a classic duo of ribs and chicken with the same rub and have both turn out fantastic. I’ve done a couple of other quick cooks with this rub but have no photographic evidence, but the results were great each time. Now I need to find a European supplier for Plowboys rubs. I’ve heard wonderful things about their Bovine Bold.

One thought on “rub it good”