Spelling aside, I turned a year wiser. Ok, it was actually a couple months ago but let’s not get carried away with details. To celebrate I decided to cook up some Ribs. Realizing I have never written a real post about ribs, I thought I’d throw this one out there.

First the meat: In Belgium there is only one type of rib, the Baby Back rib (bottom of the photo to the left). Strangely enough on menus all across the kingdom they are always called Spare ribs (top of the photo to the left) . After some discussion with my local butcher I finally figured out what real Spare ribs are called here, Vleesribben (or “Meat ribs”). They are usually cooked and served as individual rib bones here, but I wanted full racks of course. Armed with this new knowledge I ordered up three racks of meat ribs for my birthday.

The racks were cut a bit taller than what you typically get back in the US, but not as long. I trimmed the ribs St. Louis style and rubbed them with the latest version of my evolving rib and butt rub. 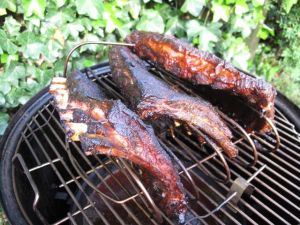 The ribs went into the smoker at 100C (212F). The minion-method fire was made up of coconut shell briquettes with 4 large chunks of hickory and apple wood buried throughout. The smoker stayed right between 100 and 110 (212F to 230F) for 5 hours until I ramped it up to around 130C (265F) for two more hours. None of that 3-2-1 nonsense, just a well controlled smoker and some good meat. I was using water in the water-pan but plan on doing it with a clay-saucer next time to compare. The ribs were mopped twice during the cook with straight apple juice but one rack did also get a slathering of RodenQue sauce 30 minutes before pulling them off. The meal was complete with a whole grilled chicken, cornbread, coleslaw, salad, RodenQue sauce, and one of Ribs best friends… beer.

These were my finest ribs yet. They were nicely smokey and tore away from the bone cleanly, but weren’t so tender that they were mushy (like in a lot of restaurants). I’m still dialing in the rub and the process, but these meat sticks made me darn proud. This cook reignited my love of ribs. I’ll have to start cooking them more regularly from now on.