In the past 6 years I have only brewed twice (including this time). That doesn’t mean that I’ve lost my passion for brewing beer. It’s just been difficult to find the time to do it. With the kids getting a bit older now, I should be able to find some more time.

The System: With some Christmas generosity, I was able to order an Arsegan EasyBrew 30 liter brew system. This made-in-China brew system is sold under different brand names like HopCat, Brew Monk, Klarstein Mundschenk, Ace Microbrewery, and many more. While not a fully automated robotic brewer, it promises to cut down the time needed to brew. I’m not going to review this system right now, but once I’ve used it a few times I will post a thorough review. 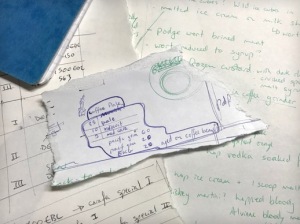 The Recipe: While cleaning up my desk at work I came a cross some recipe ideas intertwined with some sketches. There were a couple standouts using coffee in paler beers. With my newish passion for coffee I thought what better way to get back to brewing? Initially I wanted to go with something between and English and an American Pale Ale. Something with hop character to play with the coffee notes, but not enough to take away from the coffee. I ended up lowering the hops and adding more colored malt. I’m not sure what category the beer would now fit into now. Perhaps a Special Bitter? Perhaps not. This recipe will grow in complexity as it evolves. This is just a starting point. It’s a sketch of a beer which is looking for some direction. Thats why I am calling this brew a “sketch.”

I used to write my brew posts during the fermentation phase. The idea was to go back and add notes to the posts after final tasting. That didn’t happen enough. Now I’ve decided to not write my brew posts until the final beer is finished and in my glass. Then I can already share my thoughts on the recipe and how I could improve the beer.

How did it turn out?

In short, I see a lot of potential with this beer. I wanted a lower alcohol beer with a full body and earthy, almost woody, hop character with coffee and chocolate coming in the middle and riding it out through the finish. Right now its too heavy on the chocolate. I thought the somewhat higher percentage of Pale Chocolate malt would compliment the Sumatra Lintong coffee which also has earthy chocolate notes. It’s too much. I either need to throw out the chocolate malt or choose a fruitier more acidic coffee. Ethiopian Natural Sidamo, one of my favorite all round coffees, would have been a better choice.

The mouthfeel and body are exactly what I wanted. The oats and the higher mash temperature worked their magic to keep the beer from being too thin and watery, while not being chewy. Its definitely a pleasing drinker.

The hops are too subtle, but the character is what I was looking for (cedar, herbal). I am however, left wanting a citrus note on the end. Perhaps a late addition of a citrus forward hop wouldn’t hurt. That would play well with a more acidic coffee. I think a touch of fruity hops to round out the hop character, and bridge to other two hops, wouldn’t be a bad idea either.

The beer is a good starting point but it needs to become a bit more rounded. I have time to think about it, but perhaps something more like this:

40-50 IBU from a blend of Northdown and Hallertau Blanc with a small late addition of Pacific Jade.

Ethiopian Sidamo dry “Beaning” for a few days, then fill in with some fresh brewed coffee to taste.

A little bit about the EasyBrew system:

This Chinese made system is essentially a Grainfather clone for just under half the price. Build quality is better than I had expected but there is still room for improvement. This newest version of the Easybrew is programmable. You can put in all of your steps (multiple step mash), boiling, and all your hop timers. It is capable of going up to 2500kw heating power (programmable for each step) which gets you from step to step quickly and makes it more powerful then the Grainfather. The volume markings on the inside though are way off. These type of systems are essentially a Brew In A Bag system, where the bag is replaced by a metal container, but by adding a sparge step you have a bit of a hyrbid brew system. Like I said earlier, once I’ve had a few brews under my belt with the EsayBrew I will write up a detailed review.

all of the beer ingredients were ordered from The Malt Miller. The green coffee beans were from Redber Coffee

The music for the video is Exotica by Juanitos. Used under 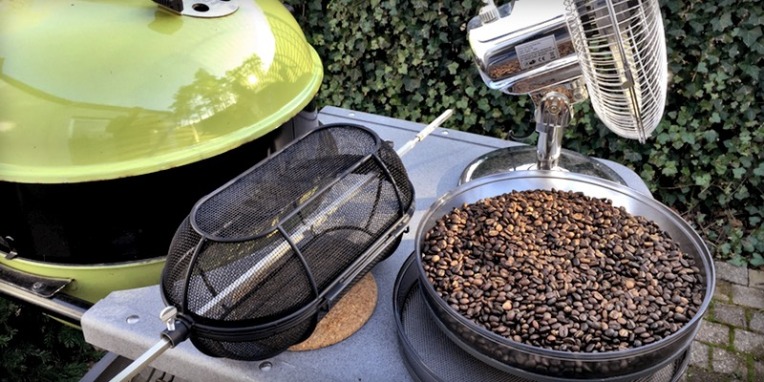 In my college days, I was often found in a dark corner of a coffee house, sitting on a couch of questionable character, with my face glued to a mug of coffee. I’m talking about unadulterated coffee here, not the sugar-filled-chilled-froufrou-skinny-double-whipped-cocoa variety. Caffeine fueled my studies. Moving to Belgium was like entering rehab. The coffee culture here is completely different and it’s all about the French or Italian roast. Great for espresso, but the beans are so roasted that their origin doesn’t come through. I missed the days of tasting the differences between an Ethiopia Sidamo and a Kenya Bora. Over the past few years though there have been a number of more American style coffee houses/roasters popping up (Thats sounds odd to Belgians because they think that all coffee in the US is watered down truck-stop style coffee). When Mrs. Smokey brought home a bag of beans from the coffee roaster near her office, part of my brain woke up from its coffee coma. After 10 years I was addicted again. The smell of good coffee puts me in a euphoric trance. A complex melange of nuts, chocolate, leather, earth, tobacco, ripe fruit, leaves, and more. When something like that gets a hold of my imagination I want to dive into it.

There are many home-roasters around the world and there are many techniques for doing it. They range from dedicated electric coffee-roasters, popcorn poppers, ovens, to cast iron skillets. After reading a few posts online about turning a rotisserie into a backyard roaster, I knew I wanted to try it out. About a week later, Weber introduced a fine mesh basket for their rotisserie (Only in Europe at the moment). It looked perfect. But would it work?

Condensing coffee roasting down to its most basic form you get this:

On my first attempt, I used the Weber “Steak House” lump charcoal (Quebracho wood from Paraguay) since this is a very hot burning charcoal. I was really happy with the resulting coffee and the color was spot on for a City+ roast. There was a very light “campfire” smoke note on the nose, with a little carry over to the flavor. Some roasters see smoke as a flaw but there are other roasters (both professional and amateur) that roast over wood-fire and are looking for that character. I for one found it a nice, subtle addition.

For the next few roasting sessions I used coconut briquettes just to see if I could make a “clean” coffee without any smokey notes. The resulting coffees were smoke free, but the fire was lower in temperature. This creates some problems. You have to make sure that you get all the heat right under the coffee beans. If the fire is too cool you end up baking the beans rather than roasting them. Then you get a more bready and grainy coffee. The chaff also doesn’t “explode” off the beans like it should giving you some odd looking beans.

Cooling and de-chaffing the beans is pretty simple. Just pour the beans back and forth between two colanders in front of a fan. After that you will have roasted coffee but you’ll notice that the aroma isn’t quite right yet. Let the beans sit and mature for at least 48 hours. The aroma develops further while the acidity and roast notes mellow.

My process (usually going for a City+ to Full City roast):

Roasting coffee in this way is a lot of fun and it’s another excuse to fire up the grill and experiment with flavors. It is also quite easy and quick. Just try it out if you like coffee and have a rotisserie. I was quite surprised how much I liked the slight smoke character when I used the quebracho lump. There are a lot of possibilities playing around with smoke and matching it to specific coffees. Of course there is also the whole question of blending which I haven’t really played with much. Once you get into it there are millions of ways to create new flavors in coffee, and that’s before the geeking out really starts.